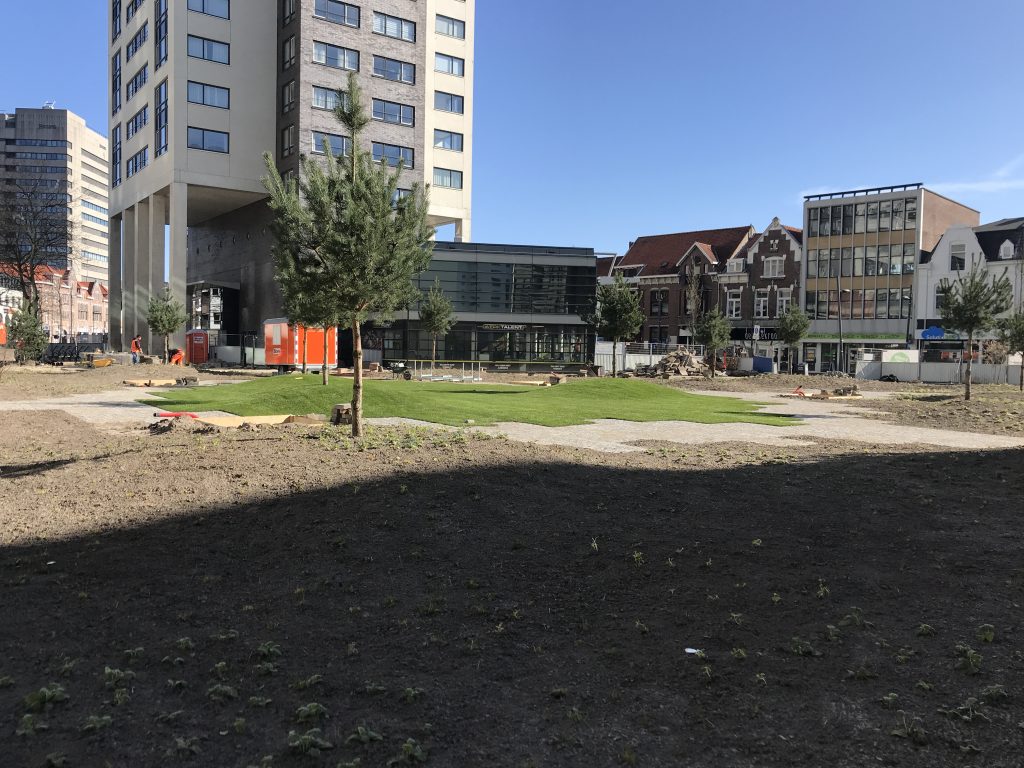 Background
Discussions about the redesign of a square on top of a garage in Clausplein Eindhoven in Netherlands was held for years between local residents, entrepreneurs and the municipality. The goal was to make the stone surroundings of  Clausplein a bit more green. The Clausplein is also the roof of a parking garage. In 2019 the municipal tendered for the best greening, a tender won by the green experts from Donker Groen. Optigrün was called in by them to supply a climate-adaptive roof system. Optigrün collaborated with BVB Landscaping.

Climate-adaptive roof system
The Netherlands is experiencing more heat waves then before, also more large rainfalls. When Vlijm Henn, Director of Optigrün Benelux, presented his idea about a climate-adaptive roof system, he offered a solution with a regulating effect; solving both water shortage and waterlogging. The challenge of the roof system was to find the right synergy between the retention layer and the substrate. This is how the roof system was an answer to their needs.
– Rainwater is collected in the substrate. When saturated, it leaks into a WRB (water retention box, ed.), an empty space of 15 cm high. Here, the rainwater is retained and, as required by the above-ground greenery, it is sucked up via capillary cones. As a result, the substrate is less likely to dry out and the vegetation can grow optimally, Vlijm says.

Vlijm had earlier experience of implementing smart flow control systems for roof gardens. Discussing drainage, there is a valve over the rainwater drain. A valve that is closed all year round, but can be opened. The municipality has then placed sensors in front of Clausplein to measure the moisture content.

– If a lot of rain is predicted, and a lot of rainwater is already stored, the valve opens and water is discharged towards a tank, so that space is made for the incoming rainwater and later the water can be pumped back during drought. A climate-adaptive design, therefore, suitable for very wet periods and for periods of heat and drought, Vlijm says.

– The substrate that now lies consists of very fine, organic material and has a better capillary effect and a greater water-retaining capacity than other roof garden substrates, Jarno says.

Read about our Urban Roof Soil
Optigrün and BVB Landscaping are currently working on the development of some new substrate products for various roof applications in urban areas. One of these are Urban Roof Soil, link here.

The horticultural industry has been impacted by the Covid-19 in two very distinctive ways. On...
Read more

As part of its growth strategy Kekkilä-BVB expands its business to the horticultural market in China in full scale. Kekkilä-BVB’s brands, Kekkilä Professional and BVB Substrates are already having a strong foothold in the Chinese market. Sustainability is at the core of Kekkilä-BVB’s business and supporting China’s high ambitions in sustainability developments. Water is a rare and expensive resource in China. Kekkilä-BVB’s substrates that lower water usage and require less fertilisers will bring savings for growers and enable more efficient use of these important resources. Kekkilä-BVB’s new office is located in the famous port city of Qingdao in Shandong province.
Read more

By definition, soil health means the continued capacity of soil to function as a living ecosystem - a viable community of organisms that sustains plants, animals and humans. From a gardener's point of view this would mean a substrate that sustains healthy and flourishing plants with minimal input like fertilization, raking and weeding. Soil is a natural habitat for numerous micro-organisms - most of which live in air and water pores among the solid mineral and organic particles, and most of which are beneficial for the soil and plant health, although numerous forms of pathogenic soil micro-organisms also exist. Soil micro-organisms include different species of bacteria, fungi, protozoa and nematodes, of which the beneficial ones stabilize the soil and they help the water and nutrient cycling, for example by decomposing organic matter. Along with bigger organisms - worms, arthropods, birds and mammals they form the soil food web. A healthy soil food web maintains itself and recycles nutrients and materials effectively.
Read more

We use cookies on our website to give you the most relevant experience by remembering your preferences and repeat visits. By clicking “Accept”, you consent to the use of ALL the cookies. However you may visit Cookie Settings to provide a controlled consent.
Cookie settingsACCEPT
Manage consent

We use cookies on this website to offer you a better browsing experience. Some are necessary to help the website work properly and can't be switched off, and some are optional but help us improve the site in other ways.
Necessary Always Enabled
Necessary cookies are absolutely essential for the website to function properly. This category only includes cookies that ensures basic functionalities and security features of the website. These cookies do not store any personal information.
Preferences
Preference cookies are used to store user preferences to provide content that is customized and convenient for the users, like the language of the website or the location of the visitor.
Analytics
Analytical cookies are used to understand how visitors interact with the website. These cookies help provide information on metrics the number of visitors, bounce rate, traffic source, etc.
Functional
Functional cookies help to perform certain functionalities like sharing the content of the website on social media platforms, collect feedbacks, and other third-party features.
Save & Accept
Powered by